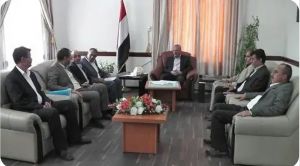 The Deputy Prime Minister for National Vision Affairs, Head of the Executive Office of the National Vision Administration, Mahmoud Al-Junaid, discussed today with the Minister of Transport, Amer Al-Marani, the ministry's plan for the second phase of the national vision for building the state.
The meeting, in the presence of the head of the General Authority for Regulating Land Transport Affairs, Walid Al-Waadi, and the Undersecretary of the Ministry of Transport for Financial Affairs, Adel Al-Madani, touched on the priorities of the ministry's work in the aspects of administrative reform.

Al-Junaid stressed the importance of the strategic role played by the Ministry of Transport and its bodies and institutions during the current stage of the national vision to bring about the desired transformation.

He noted the important steps taken by the Ministry of Transport during the first interim plan and the administrative reforms aimed at strengthening institutional work, improving services and operations, and building the capacity of cadres.

He pointed out the necessity of providing the basic requirements and addressing the difficulties, so as to enable the ministry to carry out its role and perform its tasks.

The Deputy Prime Minister praised the role of the Ministry of Transport and its affiliates in serving the citizens despite the aggression and the siege targeting the capabilities of the Yemeni people, including the transport sector.

Meanwhile, the Minister of Transport indicated that the ministry is currently working on implementing the national vision plans that will improve the services it provides to citizens, with a focus on human development as an essential foundation for the advancement of work.