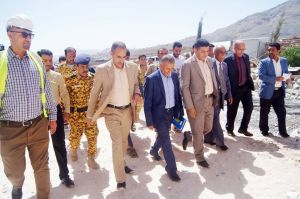 The Minister of Transport, Amer Al-Marani, and the head of the General Authority for Regulating Land Transport Affairs, Walid Al-Waadi, were briefed today on the progress of work and the percentage of work.

Completion of the public service project in the authority.

The Minister of Transport heard from those in charge an explanation about the completion rate of the project, which amounted to 70 percent, which consists of a public administration to serve the public

And a hall for training and rehabilitation and a general administration for the issuance of licenses.

The Minister of Transport stressed the need to complete the project on time.. praising the efforts of the leadership of the General Authority for Regulating Land Transport Affairs and its keenness to

Developing and modernizing the areas of land transport and implementing what was included in the national vision for building the modern Yemeni state.

He pointed out the importance of training, rehabilitation and capacity building, which would improve the areas of land transport professionally, technically and administratively.