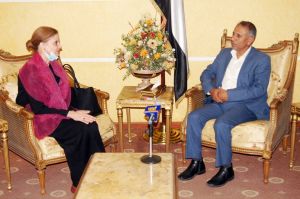 The Minister of Transport, Amer Al-Marani, met today in Sana'a, the Deputy Head of the United Nations Mission to Support the Hudaydah Agreement, "Daniela Kroslak".

The meeting reviewed the mission's efforts in implementing the Stockholm Agreement, coordinating the redeployment and the facilities provided by the Ministry of Transport from one side for the success of the mission's work in Hodeidah Governorate.

The meeting touched on the humanitarian aspects of the suffering of the Yemeni people as a result of the aggression and the blockade imposed by the countries of the Saudi-led aggression through the maritime piracy they practice in detaining and preventing the entry of oil, pharmaceutical and food derivatives ships for the Yemeni people to the port of Hodeidah despite obtaining permits from the United Nations.

In the meeting, the Minister of Transport stressed the need to lift the blockade and allow entry to oil derivatives ships that are being held at sea, as they are among the essential needs for the life of the Yemeni people, who have been suffering from aggression and a comprehensive siege for more than six years.

He pointed to the continued closure of Sana'a International Airport by the Saudi-led aggression, which is in violation of international laws and agreements and the regulations of the International Aviation Organization, pointing to its disastrous repercussions, as it prevented more than 42,000 patients from traveling for treatment abroad and prevented stranded and expatriates from returning to the land. Motherland.

Minister Al-Marani expressed regret that the project to rehabilitate the port of Hodeidah has not yet been implemented, although this is one of the main axes stipulated in the Stockholm Agreement.

The Minister of Transport called on the United Nations to pressure the coalition of aggression quickly to lift the unjust siege on the Yemeni people, who are suffering the greatest human tragedy in history, and to allow the ships detained at sea to enter the port of Hodeidah.

In turn, the Deputy Head of the United Nations Mission to Support the Hodeidah Agreement confirmed the keenness of the mission and the United Nations to implement the Stockholm Agreement in all its main axes, including the rehabilitation of the port of Hodeidah with the aim of alleviating the suffering of the Yemeni people and providing their necessary needs.