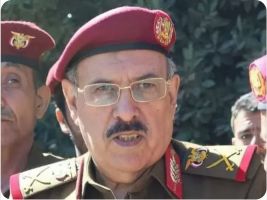 The Minister of Transport, Major General Amer Al-Marani, sent a cable of condolences and sympathy on the death of Major General Yahya Muhammad Al-Shami, Assistant Supreme Commander of the Armed Forces, after a life full of work and giving in the service of the homeland and the armed forces.

In his telegram of condolences to Judge Mutahar Al-Shami, brother of the deceased, his sons, and the Al-Shami family, Minister Al-Marani praised the merits of the deceased and his national roles, which contributed to the consolidation and development of military action with a live conscience, sincerity and dedication.

He pointed out that the deceased Al-Shami was one of the military leaders who devoted their precious lives to serving the country in all the positions he held and the tasks that were assigned to him, the last of which was an assistant to the Supreme Commander of the Armed Forces.

Minister Al-Marani said that the homeland in general and the armed forces in particular lost by the departure of Major General Al-Roken Al-Shami, one of the most prominent leaders in defending Yemen.

He stressed that the deceased Al-Shami had courageous stances in the face of the US-Saudi aggression and confronted it with all strength and firmness.

The Minister of Transport expressed his sincere condolences and deep sympathy to Judge Mutahar Al-Shami, the sons and family of the deceased and all the Al-Shami family.. He asked the Almighty God to bless him with his vast mercy and great forgiveness and dwell in his vast gardens and inspire his family and relatives patience and solace.